Christian Freedom Under Fire in Norway 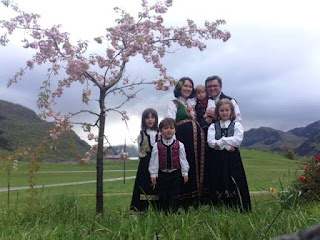 I just signed a petition to tell the government of Norway to return children back to their natural and rightful parents, Marius and Ruth Bodnariu.  I'm requesting all readers of this blog to sign this petition. Please go to this link: http://www.ipetitions.com/petition/christian-family-persecuted .   It is very easy to do.  This is an issue that must not be ignored because of the ramifications of  the government of Norway not hearing outrage over it.  There have been protests throughout the world for the Bodnariu family that had their children stolen from them simply because they are Christians.  They have done no wrong.  The charge brought against them is that they are "too Christian."
You have an opportunity to express your thoughts on the petition.   My comments are the following:
"This is outrageous.  Children belong to their parents.  Send them back!"  Several people have already signed it and made comments since I have.   Let's keep up the momentum.  At the bottom of this post are video clips that show protests and some of the deep felt concerns for families in Norway.  You can do your own research on this subject.  It is my hope that many more people sign the petition and that protests would continue throughout the world.

One video on this subject brings up the popular poem by  Martin Niemöller who was a Lutheran pastor that spoke of the cowardliness of German intellectuals that would not stand against Hitler.  The poem goes like this:

Something you can also do is make this family a prayer request in your church.  Prayer changes things.  This is part of a spiritual battle and must also be fought that way.


Please forgive the poor English grammar contained in the following video.  Those that made it had a heart to share real concerns.  It is not just about the Bodnariu family, but others also that had children snatched from them.


The following radio program by Janet Parshall interviews a lawyer who has been speaking up for parents like Marius and Ruth Bodnariu for a number of years.
http://moodyaudio.com/person/76578/marius-reikeras