Which? A Poem About the Value of Children 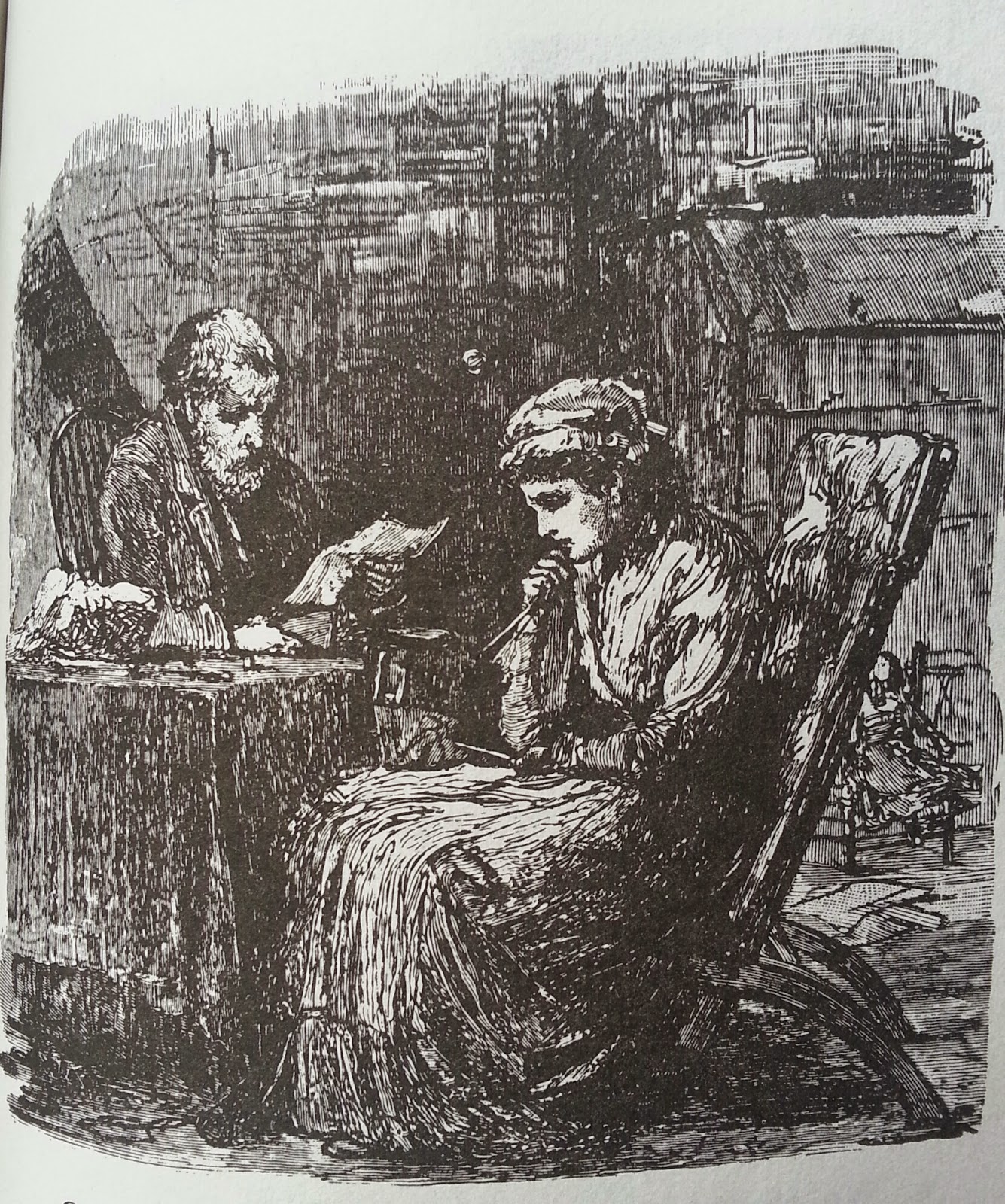 What value is in a child?  The following poem from McGuffey's Fourth Reader gives a story of a couple that were very poor with seven children.  They found themselves in a position where they were given the opportunity to give up one of their children in order to get material gain.  They looked at each of their children before giving their reply. They found themselves refreshed by considering the blessings they had.  Here is the poem simply entitled:

by  Mrs. E. L. Beers
Which shall it be? Which shall it be?
I looked at John-- John looked at me;
Dear, patient John, who loves me yet
As well as though my locks were jet.
And when I found that I must speak,
My voice seemed strangely low and weak;
"Tell me again what Robert said!"
And then I, listening, bent my head.
"This is his letter:"

"'I will give
A house and land while you shall live,
If, in return, from out your seven,
One child to me for aye is given.'"
I looked at John's old garments worn,
I thought of all that John had borne
Of poverty, and work, and care,
Which I, though willing, could not share;
I thought of seven mouths to feed,
Of seven little children's need,
And then of this.

"Come, John," said I,
"We'll choose among them as they lie
Asleep;" so, walking hand in hand,
Dear John and I surveyed our band.
First to the cradle light we stepped,
Where Lillian the baby slept,
A glory 'gainst the pillow white.
Softly the father stooped to lay
His rough hand down in a loving way,
When dream or whisper made her stir,
And huskily he said: "Not her!" 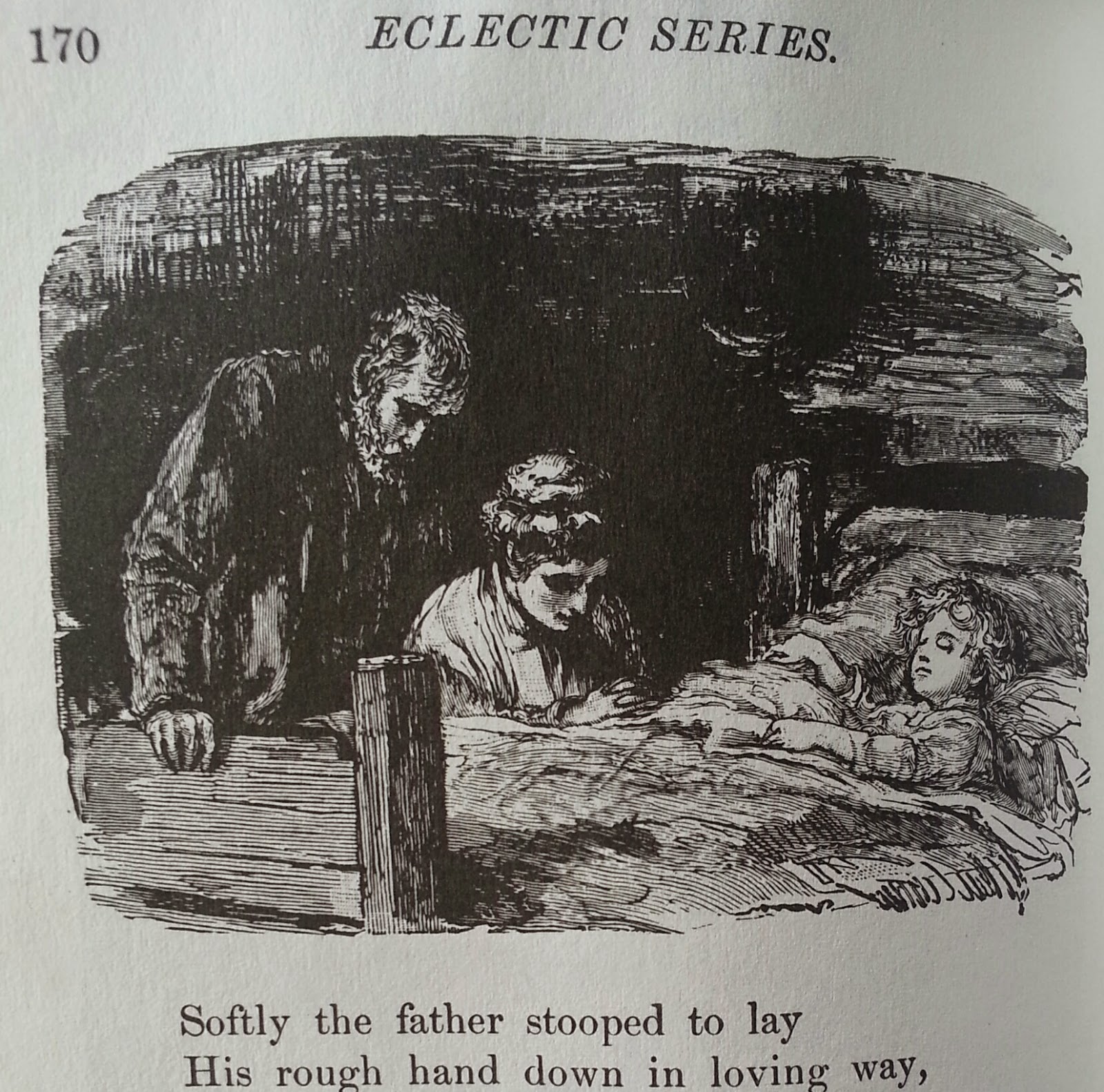 We stooped beside the trundle-bed,
And one long ray of lamplight shed
Athwart the boyish faces there,
In sleep so pitiful and fair;
I saw Jamie's rough red cheek,
A tear undried. Ere John could speak,
"He's but a baby, too," said I,
And kissed him as we hurried by.

Pale, patient Robbie's angel face
Still in his sleep bore suffering's trace:
"No, for a thousand crowns, not him,"
He whispered, while our eyes were dim.

Poor Dick! bad Dick! our wayward son,
Turbulent, reckless, idle one--
Could he be spared?  "Nay, He who gave,
Bade us befriend him to the grave;
Only a mother's heart can be
Patient enough for such as he;
And so," said John, "I would not dare
To send him from her bedside prayer."

Then stole we softly up above
And knelt by Mary, child of love.
"Perhaps for her 't would better be,"
I said to John. Quite silently
He lifted up a curl that lay
Across her cheek in willful way,
And shook his head.  "Nay, love, not thee,"
The while my heart beat audibly.

Only one more, our eldest lad,
Trusty and truthful, good and glad--
So like his father.  "No John, no--
I can not, and will not let him go."

And so we wrote in courteous way,
We could not drive one child away.
And afterward, toil lighter seemed,
Thinking of that of which we dreamed;
Happy in truth, that not one face
We missed from its accustomed place;
Thankful to work for all the seven,
Trusting the rest to One in heaven!
________________________

Of special significance to me is that this poem tells of a family of seven children which is the number of children that my parents had.  My grandpa on my Mom's side came from a family of eight children.  One of them was my great-aunt, Aunt Liz.  When I was a caregiver to her I'd ask her questions about her childhood.  Her mind was keen and she had some wonderful stories to tell.  Sometimes, when you heard the stories of her or Grandpa, you'd  wonder how any of them lived to adulthood.  I didn't want her story to be lost and I asked her to write our family history down so it wouldn't be forgotten.  She took a notebook and wrote down what she thought was important.  She finished the story by giving a tribute to her mother who raised them alone because  her husband died while the children where young.  This was her tribute:  "She had everything in order, and believed God took care of all our needs and provided everything."   I really like the way she ended her story. It ends much like the poem above.  It is the heritage that I would like to pass on.

Email ThisBlogThis!Share to TwitterShare to FacebookShare to Pinterest
Labels: McGuffey Reader poem, the value of children, Which?