I live near to a small city called Ithaca.  Bumper stickers and slogans seem to be very popular in Ithaca.  A lot of the population has connections to two  local colleges (Ithaca College and Cornell University). Perhaps it is because it is a college town that prompts people to be expressive with their views.  The bumper stickers are not the type that seem typical in other areas. The slogans are often political.  In other areas you often see bumper stickers that are for a school a child attends or a favorite ball team.  The slogans you find in Ithaca are different in that they often clearly express ideas of a worldview.    A popular sticker that is an exception to the political expression is "Ithaca is Gorges."  This one is a creative play on words as Ithaca is gorgeous, and it has some beautiful gorges.

There are often beggars in Ithaca.  It seems that some people know that begging can be a lucrative endeavor.  One sign I saw as I was leaving a parking lot was held by a young man .  The sign stated:  "Too Dumb to Steal, Too Ugly to Prostitute.  Anything you can give will help.  God Bless!"  Yuck!  It baffled me that someone would have that kind of a mindset.  It was as if he couldn't even think of a good way of making money.  Honest work was not even an option.

A more subtle message I saw on a bumper sticker was "Hate is not a Family Value."  On the surface this looks convincing.  As an independent thinker, I ask myself, "According to what standard?"  As a  believer in Christ, I find parts of the Bible that say that I should hate evil.  If the person that carried the "no hate" message was honest, he would admit that he hates certain things himself.  The issue isn't so much whether we hate certain things, but rather if we hate the right things.  We live in a time when people do what the prophet Isaiah lamented of in his day.  They say evil is good and good is evil. (Isaiah 5:20) 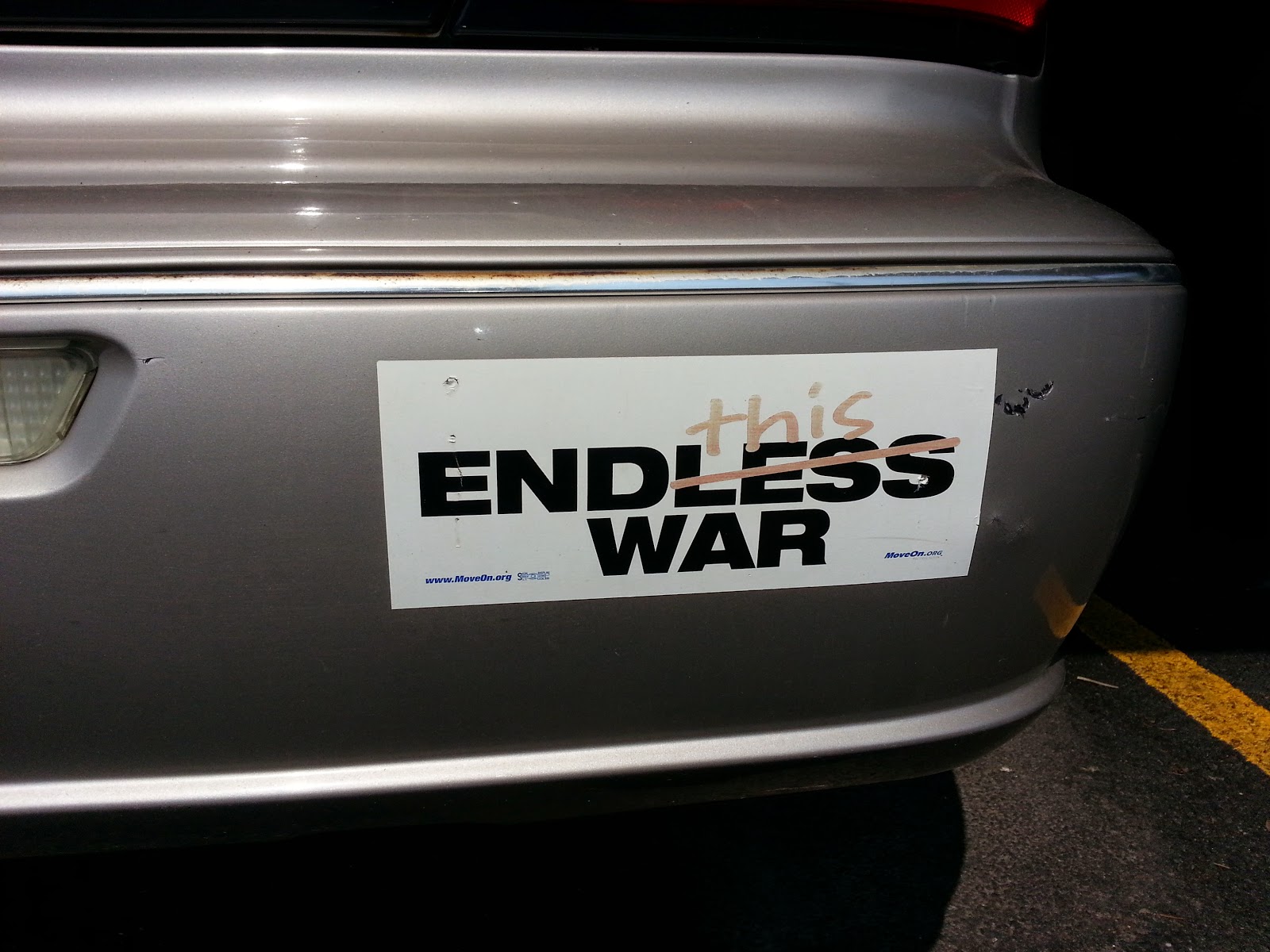 Another message that has been expressed in a number of ways, including a stop sign that had the word "WAR" spray painted on it, is the "End War" message.  Bumper stickers that say "War is not the Answer" and "Stop the Endless War" are rather prevalent.  This I can agree with.  Another bumper sticker gives the other side of the coin and also makes sense: "Defend or Die."  The real solution for war to end is the gospel of Jesus Christ to change hearts.  Christ is the Prince of Peace. Those that follow him will heed his command to be peacemakers.  The old slogan: "Jesus is the Answer" is spot on.

I saw a bumper sticker in Ithaca that mentioned Jesus.  It said, "Jesus Didn't Heal For Profit."   On the surface this looks good.  The problem is that it is implying something that is not good.  It is the mindset that the world owes me something.  It is the same message as the "I Love Obamacare" bumper sticker.  It is the same mindset as the young beggar that couldn't think of an honest way to get money.  One of the things that Jesus reproved people for was that after he had given them food they came for that purpose and not for the truth that would benefit them for eternity.

Here's a potshot: "Church + State= Taliban.  This one is false in not just what it implies, but also in fact.  The problem is the ideas that those in the Taliban carry.  "Ideas have Consequences."  As for religion and government, it is impossible to separate the two.  The choice we make is whether we acknowledge God who is unchanging and the ultimate Lawgiver, or trust in man who changes, and whose rules pass away like he does.

Another bumper sticker showed a picture of a dog behind bars.  It said, "Liberate Laboratory Animals."  There are many experiments that probably shouldn't take place and it is a shame that animals are being used in unprofitable ventures.  I’m glad though when it is the guinea pig that is being experimented on and not me.  You and I are the “guinea pigs” that will be experimented on if animals are not.  It has been reported that in China experiments are preformed on prisoners.  It has also been claimed that the government of the United States has done this to soldiers in the military.  Human experimentation has taken place with embryonic stem cells which involves taking the life of embryos.  Human life has been devalued.  Human life needs to be of much greater concern than experiments on animals.  I have a bumper sticker that expresses this with a picture of a large hand tenderly holding the hand of a baby.  The message reads, “Life is Precious.”

The following was on a teenager’s tee shirt:  “I can only please one person per day.  Today is not your day.”  Ouch!    What a way to greet everyone!  Another shirt worn by another man said, “My dreams are going to shatter yours.”  I don’t know the man, and maybe that’s best!  Christ gave a command that beats every slogan here when he said,  “A new commandment I give unto you, That ye love one another; as I have loved you, that ye also love one another.”

Sound bites and slogans can’t express things to the degree that is required for many subjects.  Witty and succinct sayings sound good, but truth isn't always flashy.  Though it is not always popular, truth must win in the end.

Thoughts on more bumper stickers can be found at this link: http://maptofreedom.blogspot.com/2015/03/more-bumper-stickers_18.html
Posted by Ron at 12:48 PM

Email ThisBlogThis!Share to TwitterShare to FacebookShare to Pinterest
Labels: Bumper Stickers and Slogans, ideas have consequences