The following parable has been shared many times by email and on sites on the Internet, and for good reason.  It tells of the relation between freedom and independence.  The details of its origin are not clear, but it was told by George Gordon, and this transcript is credited to Steve Washam. 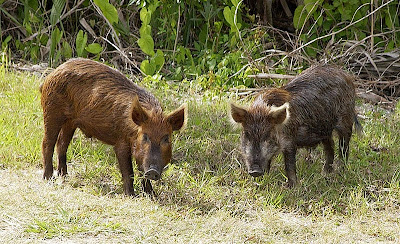 Some years ago, about 1900, an old trapper from North Dakota hitched up some horses to his Studebaker wagon, packed a few possessions--especially his traps--and drove south. Several weeks later he stopped in a small town just north of the Okefenokee Swamp in Georgia. It was a Saturday morning--a lazy day--when he walked into the general store. Sitting around the pot-bellied stove were seven or eight of the town's local citizens. The traveler spoke, "Gentlemen, could you direct me to the Okefenokee Swamp?" Some of the oldtimers looked at him like he was crazy.

"You must be a stranger in these parts," they said.

"I am. I'm from North Dakota," said the stranger.

"In the Okefenokee Swamp are thousands of wild hogs," one old man explained, "A man who goes into the swamp by himself asks to die!"

He lifted up his leg. "I lost half my leg here, to the pigs of the swamp."

Another old fellow said, "Look at the cuts on me; look at my arm bit off!" "Those pigs have been free since the Revolution, eating snakes and rooting out roots and fending for themselves for over a hundred years. They're wild and they're dangerous. You can't trap them. No man dare go into the swamp by himself."

Every man nodded his head in agreement.

The old trapper said, "Thank you so much for the warning. Now could you direct me to the swamp?"

They said, "Well, yeah, it's due south--straight down the road." But they begged the stranger not to go, because they knew he'd meet a terrible fate.

He said, "Sell me ten sacks of corn, and help me load them into the wagon."

Then the old trapper bid them farewell and drove on down the road. The townsfolk thought they'd never see him again.

Two weeks later the man came back. He pulled up to the general store, got down off the wagon, walked in and bought ten more sacks of corn. After loading it up he went back down the road toward the swamp.

This went on for a month; Then two months, and then three. Every week or two the old trapper would come into town on a Saturday morning, load up ten sacks of corn and drive off south into the swamp. The stranger soon became a legend in the little village and the subject of much speculation. People wondered what kind of devil had possessed this man, that he could go into the Okefenokee by himself and not be consumed by the wild and free hogs.

One morning the man came into town as usual. Everyone thought he wanted more corn.

He got off the wagon and went into the store where the usual group of men were gathered around the stove. He took off his gloves. "Gentlemen," he said, "I need to hire about ten or fifteen wagons. I need twenty or thirty men. I have six thousand hogs out in the swamp, penned up, and they're all hungry. I've got to get them to market right away." "You've WHAT in the swamp?" asked the storekeeper, incredulously. "I have six thousand hogs penned up. They haven't eaten for two or three days, and they'll starve if I don't get back there to feed and take care of them."

One of the old timers said, "You mean you've captured the wild hogs of the Okefenokee?"

"How did you do that? What did you do?" the men urged, breathlessly. One of them exclaimed, "But I lost my arm!"

"I lost my brother!" cried another.

"I lost my leg to those wild boars!" chimed a third. The trapper said, "Well, the first week I went in there they were wild all right. They hid in the undergrowth and wouldn't come out. I dared not get off the wagon. So I spread corn along behind the wagon. Every day I'd spread a sack of corn.

"At first they wouldn't come to the clearing. It was too far. It was too open. It was a nuisance to them.

"And so the pigs learned to come to the clearing every day to get their free corn. They could still subsidize their diet with roots and snakes and whatever else they wanted. After all, they were all free. They could run in any direction at any time. There were no bounds upon them. "The next step was to get them used to fence posts. So I put fence posts all the way around the clearing. I put them in the underbrush so that they wouldn't get suspicious or upset, after all, they were just sticks sticking up out of the ground, like the trees and the brush. The corn was there every day. It was easy to walk in between the posts, get the corn, and walk back out.

"This went on for a week or two. Shortly they became very used to walking into the clearing, getting the free corn, and walking back out through the fence posts.

"The next step was to put one rail down at the bottom. I also left a few openings, so that the older, fatter pigs could walk through the openings and the younger pigs could easily jump over just one rail, after all, it was no real threat to their freedom or independence--they could always jump over the rail and flee in any direction at any time.

"Now the pigs became more and more desperate for food. Because now they were no longer used to going out and digging their own roots and finding their own food, they now needed me. They needed my corn every other day." "So I trained them that I would feed them every day if they came in through a gate and I put up a third rail around the fence.

"But it was still no great threat to their freedom, because there were several gates and they could run in and out at will. "Finally I put up the fourth rail. Then I closed all the gates but one, and I fed them very, very well."

"Yesterday I closed the last gate and today I need you to help me take these pigs to market."

The lesson in this parable is that the "free" tax money is a bait that leads to a trap with an intention to enslave those that were independent.  Men that were independent become used to having "benefits" that come from subsidies like vouchers for private schools, welfare, farm programs, Medicaid and Medicare. In the recording, (see below) Gordon says that Social Security is part of this trap.

Below you can hear this tale as George Gordon re-told it.  Recorded in 1986 at a barn-full of farmers gathering in Kearney, Nebraska.

Email ThisBlogThis!Share to TwitterShare to FacebookShare to Pinterest
Labels: Freedom and Independence, wild and free pigs of Okefenokee Swamp