The Story of Usury and Banking, The Temple of the Thirteen Suns


Temple of the Thirteen Suns


This story was told by Mr. Robert Hemphill, former credit manager of the Federal
Reserve Bank of Atlanta, Georgia, when he was called to testify at Congressional
hearings on the cause of depressions in America. Who should know better?


Once upon a time, to the Temple of the Thirteen Suns came the rich and powerful chief Oomah
the Third, who said to the goldsmith of the temple, Hansen L. Roschab . . . "I have much gold and
am about to depart for a far country. Wilt keep this gold safely for me against my return a
year hence? I will pay thee well.''

The wily Hansen coughed loudly and covered his countenance with a cloth lest the rich Oomah
the Third observe his joy to have this treasure in his possession. When he was calm and could
look serious he said to Oomah . . . "It is a very great responsibility and risk, but I will undertake
it for a tithe that will be one shekel in every ten.''

Then said Oomah . . . "It is a deal.'' And forthwith his slaves delivered many bags containing in all
a thousand shekels of gold for which Hansen L. Roschab, the goldsmith, gave the chief a
parchment receipt acknowledging this deposit, which contained the writing, "payable to
whomsoever.'' Thereupon the chief departed happily on his journey.

As soon as he was well out of the country, the shrewd Hansen called his confidential scribe
and bade him thus . . . "Go thee now to the merchants whom I will tell thee of and secretly say
to each that thy master hath a little gold for hire upon good security.'' And the servant
departed swiftly.

Soon there came to him a great merchant who said . . . "Hansen, you old crook, I am in a jam for a
few shekels of gold. Wilt lend me?'' And Hansen replied . . . "Money is very tight these days, but
it might be so arranged. What is thy need?'' The merchant answered . . . "Two hundred shekels.''

Then said Hansen . . . "It is much money. What security couldst thou pledge for so great a sum?''

Then the merchant showed Hansen a writing of his possessions of merchandise to the amount of
a thousand shekels. Hansen said . . . "It is not enough. Thou must also pledge thy dwelling and
thy slaves and thy raiment.'' Whereupon the merchant, after much protest, pledged all his
possessions, even to his innermost raiment. (So Hansen loaned him the money.) 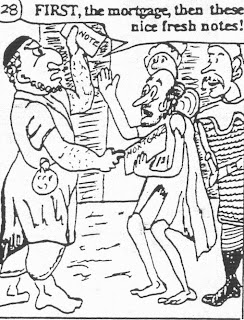 Then said he to Hansen . . . "I have no place to store so much gold. Keep it safe for me and give
me a writing that I may deliver to whomsoever I will.'' And Hansen did even so.

The next day came another merchant, and another, and still another, and to each Hansen
loaned a portion of the gold of chief Oomah the Third, taking from each as security his entire
possessions, including his innermost personal raiment, and gave to each a writing upon a
parchment showing that each had on deposit the gold he had borrowed. And it came to pass that
on the tenth day he had given parchment deposit writings for the whole of the thousand
shekels; but he still had all the gold.

Hansen reflected much upon this curious state of affairs, and said to himself . . . "These birds
know not how much gold I possess. They do not want the actual gold itself. What they really
want is credit, some deposit writing that they may pass from hand to hand as money. I have one
grand idea!''

On the next day came another merchant, and another, and still another, and to each Hansen
showed the great store of gold of Oomah the Third, and to each he pretended to loan a
portion, although he had previously loaned it all to the first ones who came.

And it came to pass that at the end of another ten days Hansen had pretended to loan to many
more merchants and had given writings of deposit for a second thousand shekels, making 2000
shekels in all, although he had only 1000 shekels of Oomah the Third. And still he had all the
gold.

Whereupon Hansen reflected to himself . . . "What a leaden-pipe cinch. I wonder I did not think
of this before. I can collect just as much usury from the phony deposit writings as for the
genuine. Verily, I am a financial wizard.''


Thereupon Hansen caused it to be noised about that he possessed a vast store of gold for hire,
and many more merchants came to borrow, and to each Hansen delivered writings of deposit
and collected generous usury and demanded pledges of all his possessions even unto his
innermost raiment, until he had issued writings of deposit for 10,000 shekels and held
mortgages on substantially the whole city. 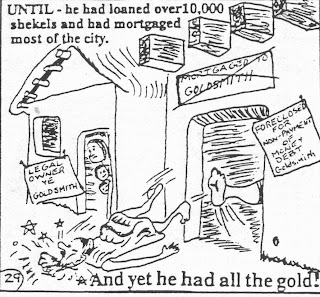 Then went Hansen to the wise man of the city and said unto him . . . "Verily I have discovered the
greatest racket of all time. I have learned the magic of making gold out of baloney; and if I can
keep the formula secret for a few years I will collect a fortune that will make Solomon's
treasury look like a second hand store. Tell me how I may keep secret this bonanza of mine for
mine own profit.''

Then said the wise man . . . "Look wise and say little and only upon matters afar off. Obtain the
ear of the town crier. Engage him to spread the impression that money is a mysterious subject
that no one understands but thee alone. Be friendly with the king's councillors and grant
their favors that the king may smile upon thee.''

And Hansen did as he was bid and collected much usury from his phony loan deposits that
circulated as money. He built for himself a mansion, collected works of art, and clothed his
wives and concubines with fine linen and jewels.

When his business had grown to many times its humble beginnings, he took over the entire
temple and by way of a sly joke called it the First National Bank, the same being from an
obscure language and meaning "place of imaginary money.'' 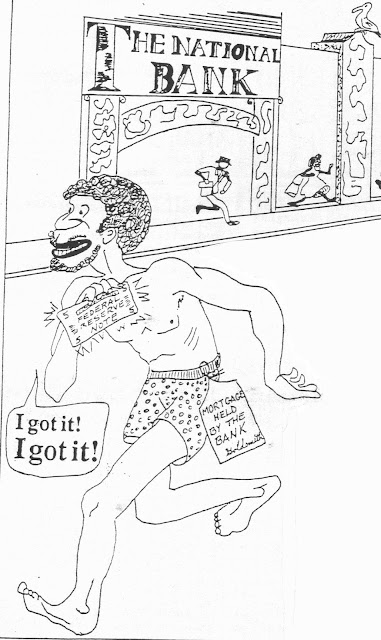 And that is the reason that all banks today have great marble pillars and bronze doors, so
that they may resemble outwardly as well as internally the "place of imaginary money'' that
Hansen L. Roschab builded upon the gold of Oomah the Third in the Temple of the Thirteen
Suns.

The text came from the source listed above.  I have a booklet with some of the illustrations posted here that realated this story.  I am unaware of  who made the drawings.

Below are some verses that relate to this subject that were found in the illustrated booklet:


"For the love of money is the root of all evil: which while some coveted after, they have erred from the faith, and pierced themselves through with many sorrows." 1 Tim. 6:10
"If thou lend money to any of my people that is poor by thee, thou shalt not be to him as an usurer, neither shalt thou lay upon him usury."  Exodus 22:25
"Take thou no usury of him, or increase: but fear thy God; that thy brother may live with thee."  Lev. 25:36-37
"Thou shalt not lend upon usury to thy brother; usury of money, usury of victuals, usury of any thing that is lent upon usury." Deut. 23:19-20
"The stranger that is within thee shall get up above thee very high; and thou shalt come down very low.  He shall lend to thee, and thou shalt not lend to him: he shall be the head, and thou shalt be the tail."  Deu. 28:43-44
"He that putteth not out his money to usury, nor taketh reward against the innocent. He that doeth these things shall never be moved." Psalm 15:5
"The rich ruleth over the poor, and the borrower is servant to the lender."  Prov. 22:7
"Hath given forth upon usury, and hath taken increase: shall he then live? he shall not live: he hath done all these abominations; he shall surely die; his blood shall be upon him."  Ezek. 18:13
"And Jesus went into the temple of God, and cast out all them that sold and bought in the temple, and overthrew the tables of the moneychangers, and the seats of them that sold doves,

Email ThisBlogThis!Share to TwitterShare to FacebookShare to Pinterest
Labels: borrower is servant to the lender, Debt as money, story of usury and banking, the temple of the thirteen suns